Home » Blog » In Search of the Elusive Hornbill

In Search of the Elusive Hornbill 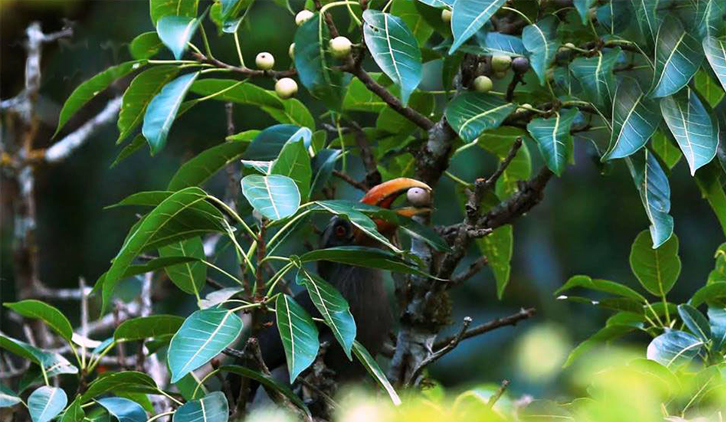 Birdwatchers are usually of two kinds: the happy-go-lucky ones, and the forever jinxed. While some slog for years in search of a wonderful bird, others sight it during their first ever walk through the trail. Either way, tracking a bird, especially one as frustrating as the star of my story, is no easy task.

Let me give you a little background about the Hornbill, or in this case, the great Indian Hornbill. Considered to be among the most fascinating and charismatic birds, they are characterized by their deep-yellow casque, a cylinder-shaped appendage that lies over their beak, making them stand out when compared to most other birds out there. The hornbill is the state bird of Kerala, and has a characteristic barking call which resonates through forests and hills, especially during mating season. George Orwell said it best, “All birds are equal, but some birds are more equal than others.” When it comes to the Indian Hornbill, this adage definitely holds true.

The forests surrounding Ibnii are full of some incredible flora and fauna; from wild figs to the Bonnet Macaque, as well as several species of birds including Hornbills. This makes a morning walk with the resident naturalist through the forests a definite to-do whenever you land up here.

A Walk Through the Woods of Ibnii

I was up by 6am and ready to go with my companions in the hopes of sighting the great Indian hornbill and other attractions which frequent the woods around Ibnii. The day was slightly overcast, an inauspicious start especially if you want to go bird watching, as most species tend to come out only when the sun is out.

Being the hopeful optimist that I am, I walked into the woods which soon turned into heavy foliage. Our naturalist, a wonderfully sarcastic person, reminded us that nature does not bend to our requests. We trudged through the ever-thickening green, coming across wild coffee-plants in the midst of a clearing, all of which owed their existence to the monkeys which abound the region. You see, monkeys love eating the small, red, ripe fruits of the coffee plant because they tend to be sweet. Once done with the flesh though, the seeds are useless, and are scattered by them only to grow into new plants.

Hooked on a Hornbill’s Call

Owing to the gloomy sky, our rather adventurous walk was soon drawing to an end. We did catch sight of a few very interesting birds, but the hornbill still eluded us. That was until we suddenly heard a characteristic “Bok”! sound which could have only come from one source! With binoculars glued to our eyes, we traced the canopy line, hoping to catch sight of the brilliant-yellow which is hard to camouflage in dense, evergreen forests.

A rustle of feathers and a few jaunty steps through the woods later, we still were where we started off. That was until our guide suddenly asked us to focus on a particular tree. Now let me tell you, hunting through the foliage with a binocular is no easy task, but finally, I was able to spot that characteristic beak. As I hastily fumbled with the focus controls of my binocular though, there was another “bok”! and up it flew into trees so dense there was no hope of catching sight of it again.

Well, I tried! I suppose I am one of those unlucky amateur bird watchers who need to earn their keep before being blessed with the glorious vision of a hornbill in full plumage. While I might have a lot to complain about my luck though, the same thing cannot be said about the exceptionally-revealing nature walk at Ibnii. I just hope you have better luck whenever you plan to visit this enchanted place.