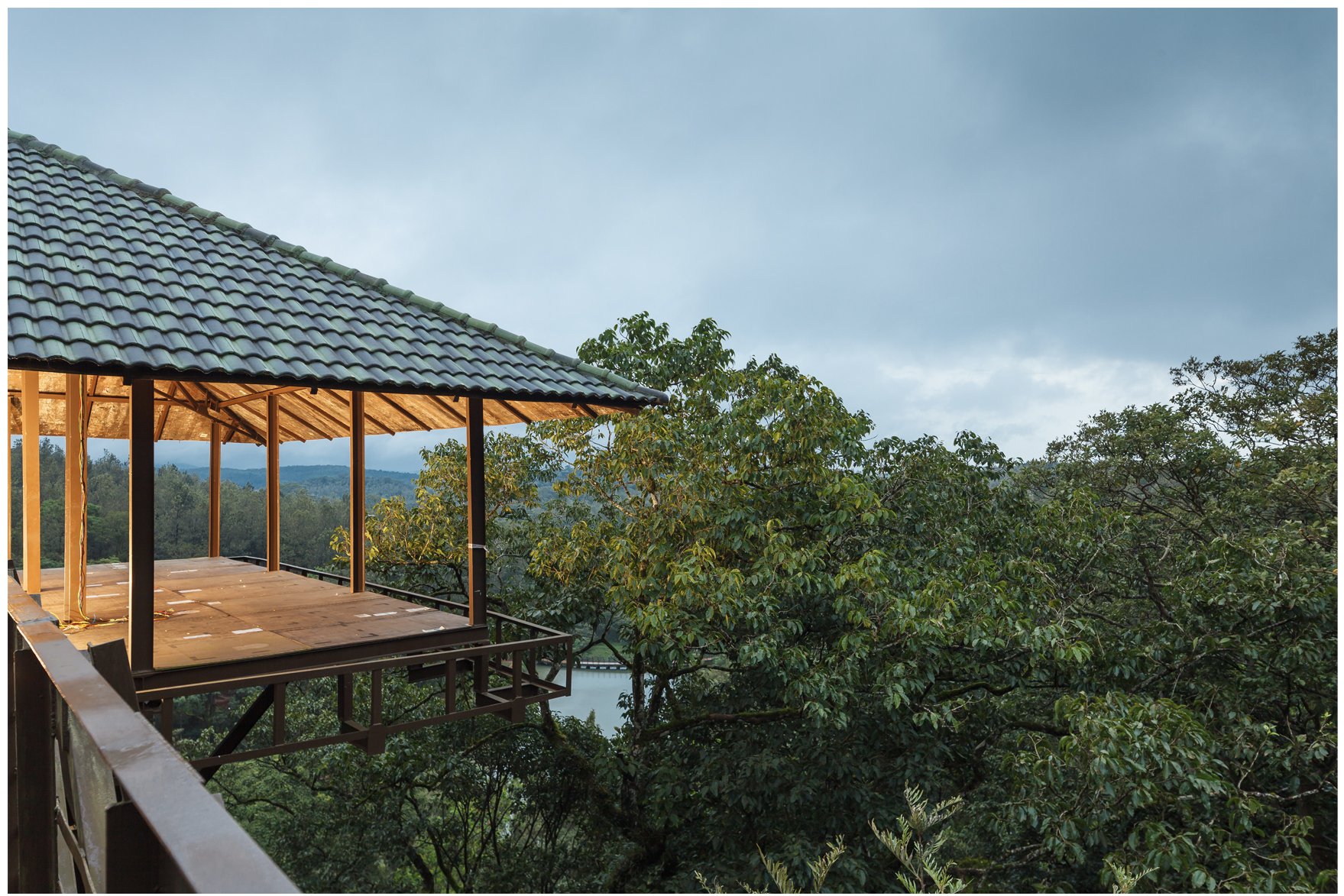 In a wooded coffee plantation spread over 120 acres, we were aiming not to intrude into its serenity, but to enhance its splendour. The first thing we built was the check dam across the dry valley in the middle to create a large lake, harvesting water. The check dam also serves as the connecting road from the entry point to the protected resort area where only electric buggies are allowed.

As for the structures we were not looking for a form in tune with any particular character or style. We wanted them to either disappear into the landscape or flow with the contour. The emphasis was on the feel good factor of being with the nature, keeping away distracting ornamentation highlighting the building as such.

The main building accommodating the reception, restaurants, bar, offices etc. is large in area and would have had a jarring presence amidst the greenery. But it was so planned to be visually non existent, being built along the slope the flat roof aligned with the road. All the trees preserved within the building in internal courtyards come up through the roof garden retaining the wooded estate feel.

The cottages have adopted two lay out designs, one linear and the other slightly curved to fit on existing contours, without earth cutting and within the trees.

The coffee shop designed by Bhavana was created at the existing coffee drying yard after enlarging the pond there. The flying roof visually connects the hill behind and the mountains ahead affording a panoramic view of the tree tops and the sky above.

The Coffee Shop design got Bhavana the first runner up award, by WADE, among women architects of Asia. The award ceremony was organised in Delhi.

The Spa is unique in many ways. Designed by Harsh. Being a paid facility, not part of the package, certain visibility is given to attract the curiosity of guests walking in the premises. Being built on an incline we could get space below to accommodate a party/meeting

Spa is an inward looking building with a soothing water body in the centre. The treatment rooms have steeply sloping roofs, going down to the water body allowing cool air circulate along the slope to the ventilator at the highest point. The view of the water body, without affecting privacy, brings in an open feel different from claustrophobic cubicles.

The Spa has been featured in Indian and International design journals.

The swimming pools are at four levels with cascading water from one to another. The whole complex is built on existing contour, the multiple terraces connected by steps.

The walk ways in the property goes alongside the lake, the fruit garden, the coffee shop pond, under the water fall by the pool making a stroll truly wow and memorable.

The whole design process was centred on the experience and positive vibes the guests would feel, at the same time passionately embracing the nature and environment. We used the existing levels and worked around trees causing zero damage to the green property. The selection of materials were totally in conformity with the stringent green building codes. Our appliances are the most power efficient. All our light fittings are LED. On top of it we have gone to extreme lengths to avoid using continuously running electric equipments. For example to avoid pressure pumps we had to lay two and a half kilometre pipeline from the highest point in the property, to attain required pressure at end points, by gravity. For our commitment for preservation of nature and efforts in saving energy we were awarded Platinum rating by the Indian green building council, the first resort in the country to receive this honour.

Two years ago Ibnii also received the recognition as the best designed resort in the country. The coveted ACE ALFA award was presented in a colourful function in Bombay.