Home » Blog, Coorg » Bylakuppe – A little Tibet in the heart of Karnataka

Bylakuppe – A little Tibet in the heart of Karnataka 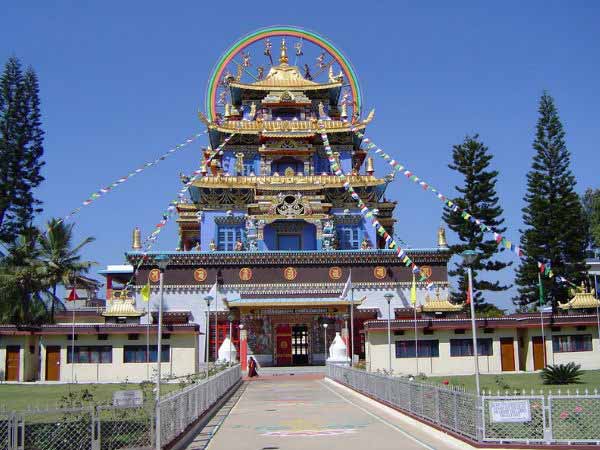 Brimming with coffee plantation and dense jungles all along the way, Bylakuppe is a small Tibetan nook in the mist laden hills of Coorg, Karnataka. Set about 2,500 Km (1,550 miles) away from Lhasa, the capital of the remote Himalayan region, Bylakuppe is a beautiful amalgamation of serene Tibetan Monasteries and rich South India culture.

Peaceful and tranquil, a visit to Bylakuppe will momentarily transport you to another country where harmony, serenity and happiness rule the kingdom. A place where long rows of fluttering prayer flags and beautifully strewn monasteries and nunneries add to the mystique and charm that the place naturally inherits.

Whether you want to experience divinity, explore the traditional Tibetan culture, or rejuvenate yourself in a quiet and peaceful environment, Bylakuppe is a refreshing change and definitely a place to be!

The History
The town of Bylakuppe came into existence as a refugee camp that was set up by tens of thousands of Tibetans who sought sanctuary in India after China started occupying their region in 1959. An estimated 20,000 Tibetans live in Bylakuppe and now call it their home.

Namdroling is the most famous monastery at Bylakuppe and visiting its Golden Temple is a must. The monastery plays host to numerous tourists who make it a stopover on their way to Coorg. The moment you enter the Golden Temple, you’ll see the three towering gold statues of the three different forms of the Buddha. Turn the prayer wheel, witness mass prayers, gaze at the prayer flags hung all way along, or watch hundreds of monks engaging in some meaningful conversations and group debates, monasteries at Bylakuppe are a visual treat of everyone.

Sera Mey and Sera Jayare are two other monasteries that you must visit for their beautiful frescos that depict Buddhist mythology and traditional thangka paintings.

Nunneries
Ngagyur Nyingma is a nunnery near Namdroling monastery, but visitors are not allowed to step inside the place.

Ginger & Corn fields
Spread across thousands of acres over the hills, all of Karnataka’s ginger and corn is sourced from Bylakuppe.

Galibeedu
Galibeedu is a one-day trekking destination in Coorg. Located at a distance of about 12 km from Madikeri, it is a relatively easier trekking path that is surrounded by lush green environment, beautiful streams, chirping birds, and rustling leaves.

How to reach
Bylakuppe is about an hour’s drive from IBNII.
With Mysore a little over 80 km away by road, you can easily reach Bylakuppe by bus, followed by a picturesque half-an-hour walk off SH 88. The closest airport is in Bengaluru, while the nearest railway junction is at Mysore.

Best time to visit
While Bylakuppe can be visited anytime during the year, it’s best to visit the place during Losar – the Tibetan New Year – celebrated for two weeks in February or early March. During this time of the year, the town takes on its rustic charm, as monks beautifully don lively masks and traditional costumes and sway to music played on traditional instruments.

What to eat
When in Bylakuppe, eat where the Monks eat! With multiple eateries all along, Bylakuppe is a home to traditional Tibetan cuisine here. Gorge on steaming bowls of Thukpa, dig into fresh Momos , drink lemon tea, or relish Phing, Shabhalay and Shapta, at Bylakuppe you’ll be spoilt for choices. Chinese and south Indian staple fare is also easily available in Bylakuppe.

The final words
Bylakuppe has something for everyone. While some visit the place for its never-ending tranquility others come here to find solace. Whatever be your reason – a quick weekend getaway, a stopover while visiting Coorg, or a penchant for pocket-friendly holiday shopping – visit Bylakuppe and allow its serenity to slip into your soul and stay with you forever.

In lieu of the dry summer months and in alignment with our conservation practices, our Jacuzzis will not be operational.

Based on all state government regulations and as per government authorized requirements, all guests coming from states that will need a COVID 19 RTPCR report will have to present the same at check in.

We appreciate your cooperation.